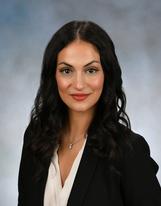 Ana Cabral is an associate at Mitchell, Bardyn & Zalucky LLP.  She joined the firm in 2017 as a summer student and completed her articles at the firm in 2020.  Her primary areas of practice are Estate and Commercial litigation as well as some Insurance and Personal Injury litigation.

Ana received her Bachelor of Arts in Criminology from the University of Manitoba in 2015 where she graduated with distinction on the Dean’s Honour List and her Juris Doctor from Osgoode Hall Law School in 2019.  Ana was called to the Ontario Bar in 2020 and is a member of the Law Society of Ontario.

In 2015, while at the University of Manitoba, Ana authored “Sentencing Youth Offenders as Adults in Manitoba: A Qualitative Analysis of the Perspectives of Youth Criminal Justice Professionals” based on her year-long research in the field of criminology and sociology.

While at Osgoode, Ana exercised various leadership roles including president of Osgoode Negotiation Club, vice president of Osgoode Real Estate Law Association and director of the United Nation’s International Labour Organization fellowship placement.  She completed the Osgoode Mediation Clinical Intensive Program in 2018 and the Child Protection Intensive Program in 2019.  From 2018 to 2019, Ana was an Osgoode Business Clinic senior caseworker at a major downtown law firm where she gained critical experience in corporate and commercial law.  At Osgoode, Ana was the recipient of the Joel Organek Entrance Scholarship for academic achievement and received several other awards including the York International Mobility Award, Osgoode Internship Award and Best Negotiation Plan at the 2019 Walsh Family Law Moot & Negotiation Competition.

Ana has negotiation training and is a certified mediator from St. Stephen’s Community House.

Before pursuing a career in law, Ana was a professional ballet dancer and toured around the world performing in world-class theatres.  During her ballet career, she worked with the National Ballet of Canada, the Royal Winnipeg Ballet, Corella Ballet in Spain and the Lisbon Dance Company in Portugal.

When not practising law, Ana enjoys hiking, volunteering at local shelters, and playing chess.  She is fluent in English, Portuguese and Spanish and has some proficiency in French.