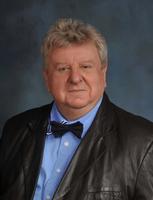 Ihor Walter Bardyn is a co-founder and senior member of the firm. In the past he practiced in the areas of Wills and Estates, Real Estate, Immigration and Corporate/Commerical Law.

Presently, he practices primarily in the fields of Wills and Estate Administration. Ihor has found great satisfaction volunteering his time in various capacities. In the past he was the Ontario Director of the Council for Canadian Unity, a representative for Amnesty International and the President of the Ukranian Canadian Professional and Business Association of Toronto.

Currently, Ihor is a member of the Council of Administration of Saint Paul University, the founder and Director of the Canada-Ukraine Parliamentary Internship Program and a member fo the Atlantic Council of Canada. Among his many awards, Ihor has received the Commitment to Voluntarism Award, awarded by the Ministry of Culture and Communications of the Province of Ontario and was recently awarded the Commemorative Medal on Her Majesty Queen Elizabeth II's Golden Jubilee.

Ihor completed his B.A. at McMaster University in 1964 and received his LL.B. from Osgoode Hall Law School in 1967. He was called to Bar for the Province of Ontario in 1969.